WHEN IT COMES to understanding the connection between cognition and vision, Dr. Solomon Gould, owner of Scenic Eye Care in St. Paul, MN, is fond of quoting his colleague Dr. Scott Sedlacek: “We look with our eyes but we see with our brain.” Adds Gould: “Without healthy processing of our vision, we are unable to interpret or respond to the images within our visual scenes.” Tools that can help measure that processing ability will always be welcomed by eye doctors like Gould who are, as he puts it, “always striving to elevate the standard of care for optometry.”

After presenting a CE lecture on innovative technologies in eyecare to a group of doctors a while back, Gould was approached by someone who has since become a dear friend and colleague, Dr. Brad Oatney out of Columbus, OH, offering to introduce him to the Thrive — a device developed by neuroscience and cognitive health company Cognivue that assesses patients’ cognitive function through a five-minute, self-administered computerized screening — and Gould was naturally interested. 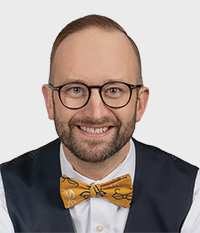 Folding up like a laptop and weighing less than eight pounds, the Cognivue Thrive is designed to permit anyone to experience the technology regardless of their vision and/or motor skills. The patient first watches a four-minute introductory video, then takes a five-minute evaluation. When they’re done, a report is delivered to the doctor highlighting reaction time and speed processing, with evaluations in three cognitive domains: memory, visuospatial and executive function. Gould has found $40 to be the most formative price point and that which yields the greatest conversion, and believes “it is only a matter of time before it becomes covered by insurance.”

According to Gould, the device is designed to be used “by any optometrist or ophthalmologist, regardless of their scope of practice or specialty. With that said, it has many niche applications that can enhance the care for specialties such as neuro-optometry, sports vision, vision therapy, and many others.” Gould has a Thrive at both of his locations.

Cognivue assisted with education, implementation and training. Both virtual and live formats are available; the Scenic Eye Care team opted for the in-person training. Gould’s use of the technology has turned him into an advocate for the idea that vision should be considered one of the top modifiable factors for the potential of cognitive decline and dementia along with hearing, hypertension, obesity and diabetes. “How this is [not already] the case is beyond me,” he says. “There is a substantial amount of research supporting the bidirectionality of vision and cognition. This technology helps to spotlight this reality.”

According to Gould, the device has been an exceptional performance enhancer for his practice. Over the past year he has used the Cognivue Thrive with over 700 patients. New patient ratio — an indication of growth and referrals — has increased by an average of 5% each month, collections per full time equivalent — an indication of staff productivity — has increased by $4,000, revenue per patient — which flags operational efficiency — is up by $120, and implementation has yielded a generous 10.5% return on investment.

Gould says he has received countless compliments from patients on the quality of care the device allows his practice to provide. “My staff and I feel a revitalized, higher-level purpose and sense of pride.” He cites testimonials from patients “whose cognitive processing measurements led to referrals and are now stabilized with intervention — all of which would have otherwise gone undiscovered until it was too late for intervention.”

Do It Yourself: Implement A Cognitive Assessment Tool

The post Onboarding A New Technology Paid Dividends for This Minnesota Eye Doc’s Patient Care — and His Bottom Line appeared first on INVISIONMAG.COM.

Tags: Best of the BestNeuroptometryOptometry

The Legacy of the TTASAAN Report – Premature Conclusions and Forgotten Promises About SPECT Neuroimaging: A Review of Policy and Practice Part II

Exosomes in the Field of Neuroscience: A Scientometric Study and Visualization Analysis

Traditional Chinese Medicine Interventions in the Rehabilitation of Cognitive and Motor Function in Patients With Stroke: An Overview and Evidence Map

The Legacy of the TTASAAN Report – Premature Conclusions and Forgotten Promises About SPECT Neuroimaging: A Review of Policy and Practice Part II

Exosomes in the Field of Neuroscience: A Scientometric Study and Visualization Analysis

Traditional Chinese Medicine Interventions in the Rehabilitation of Cognitive and Motor Function in Patients With Stroke: An Overview and Evidence Map

Potential Embolic Sources Differ in Patients With Embolic Stroke of Undetermined Source According to Age: A 15-Year Study